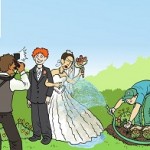 These workbooks are for creating sentences with subordinate “while”-clauses. The pictures show two actions which are related in some way… one action is causing the other, or a person is so involved in one situation that he or she doesn’t notice the other. The target sentence contains “while”: “While the man was gardening, he sprayed water on the bride.”

First, these sentences seem very long, but remember that they are created with SentenceShaper, so even people who would never produce such long sentences may be able to handle the harder SentenceShaper workbooks.

Second, these workbooks provide practice in dealing with more complex ideas. Practice that is limited to very simple pictures like “The woman feeds the cat” may not scale up to real life language use, because in real life you need to do what is called “thinking for speaking” — deciding which parts of a given situation to describe in each sentence, for example.

Third, the target sentences in this workbook are just examples of appropriate ways to describe the pictures. The user can play them back and compare them with his or her own productions, but it must be made clear that there is not just one “right” answer.